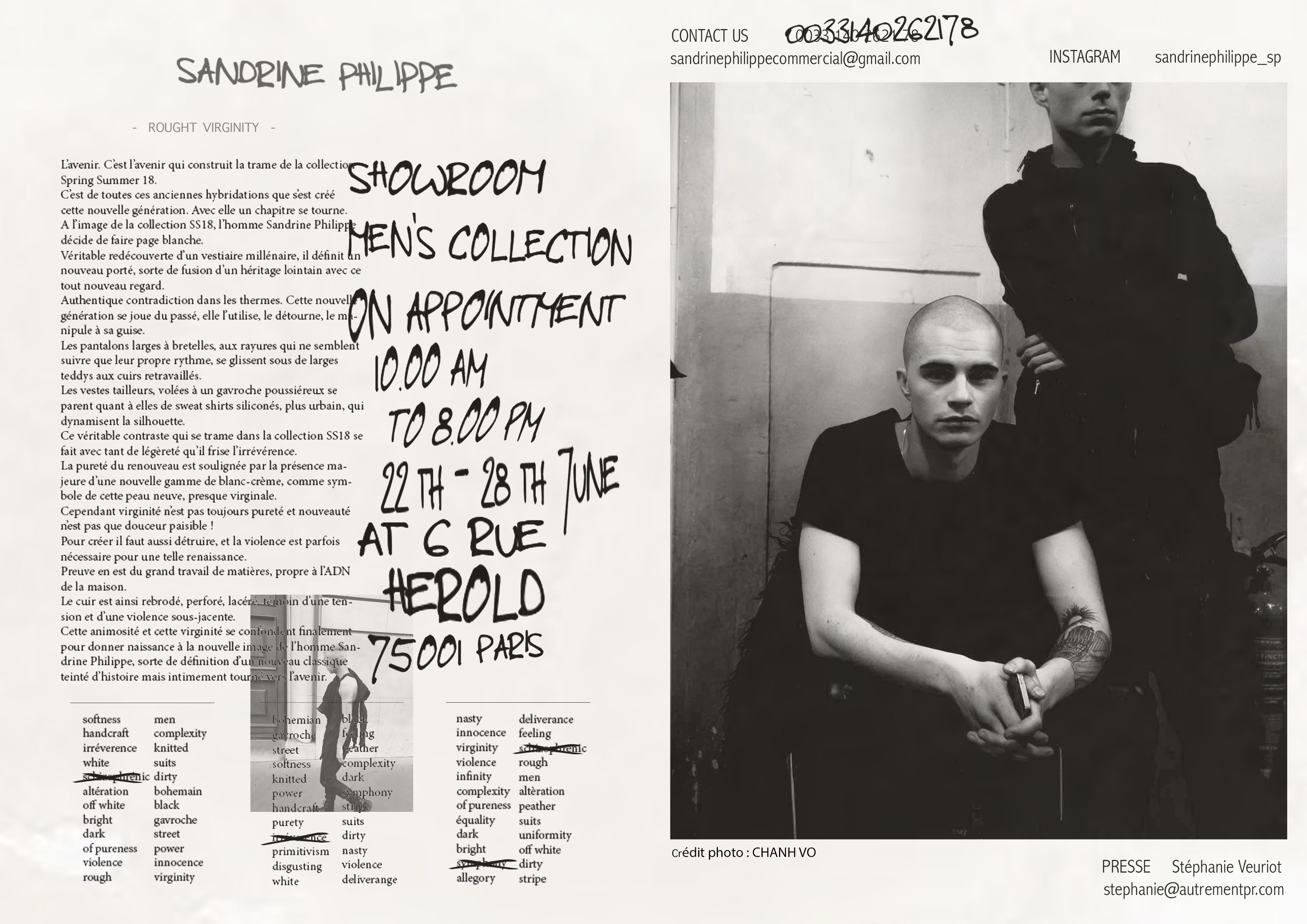 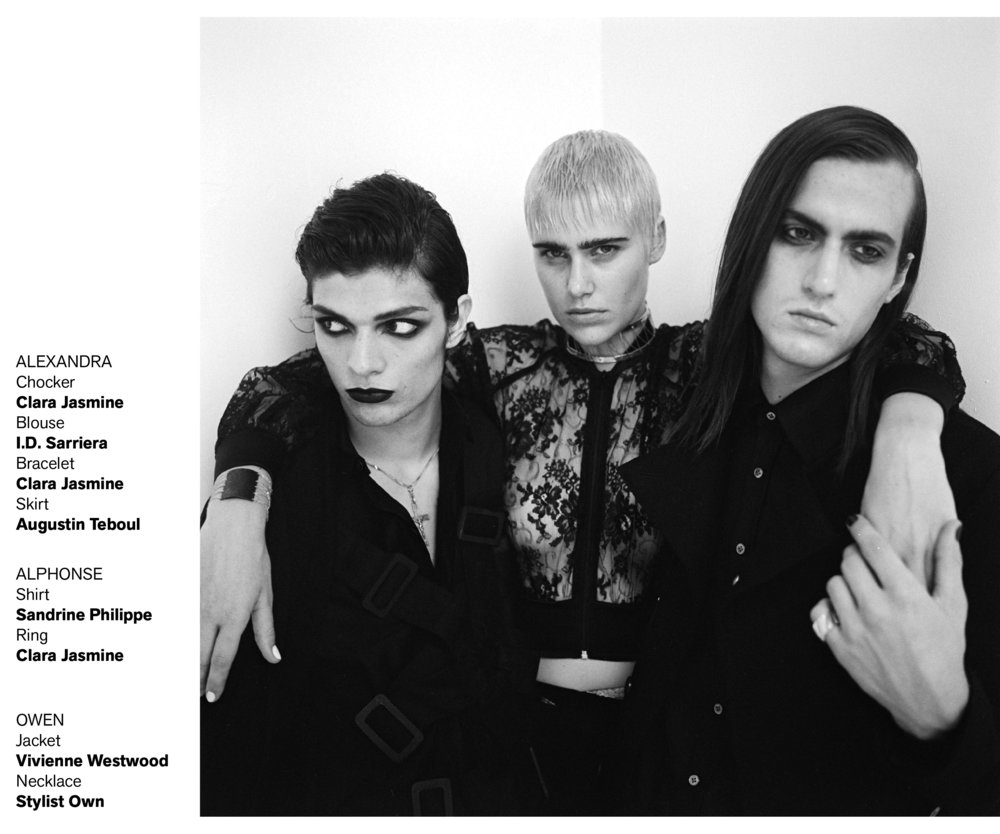 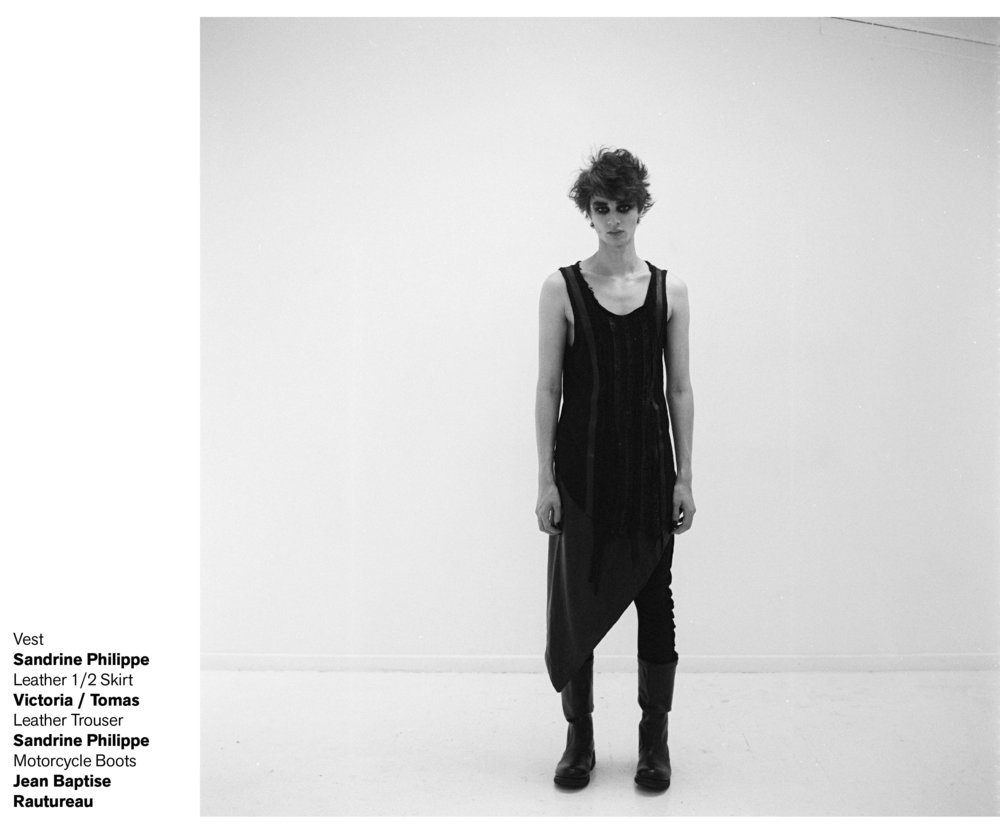 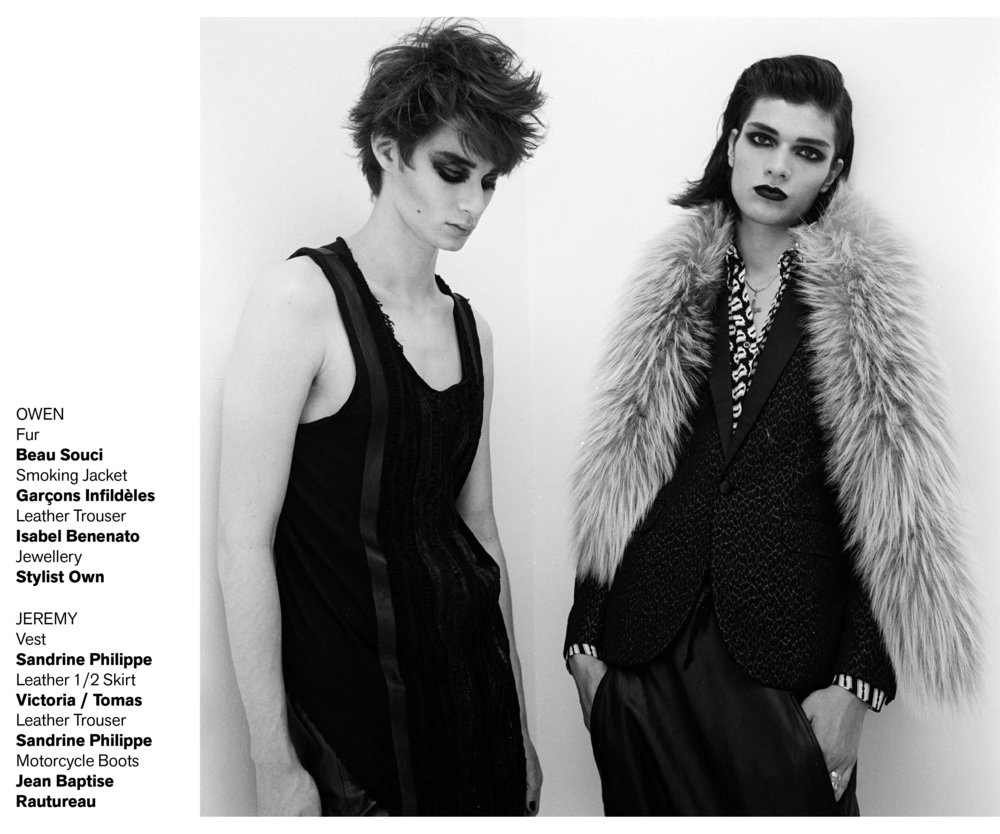 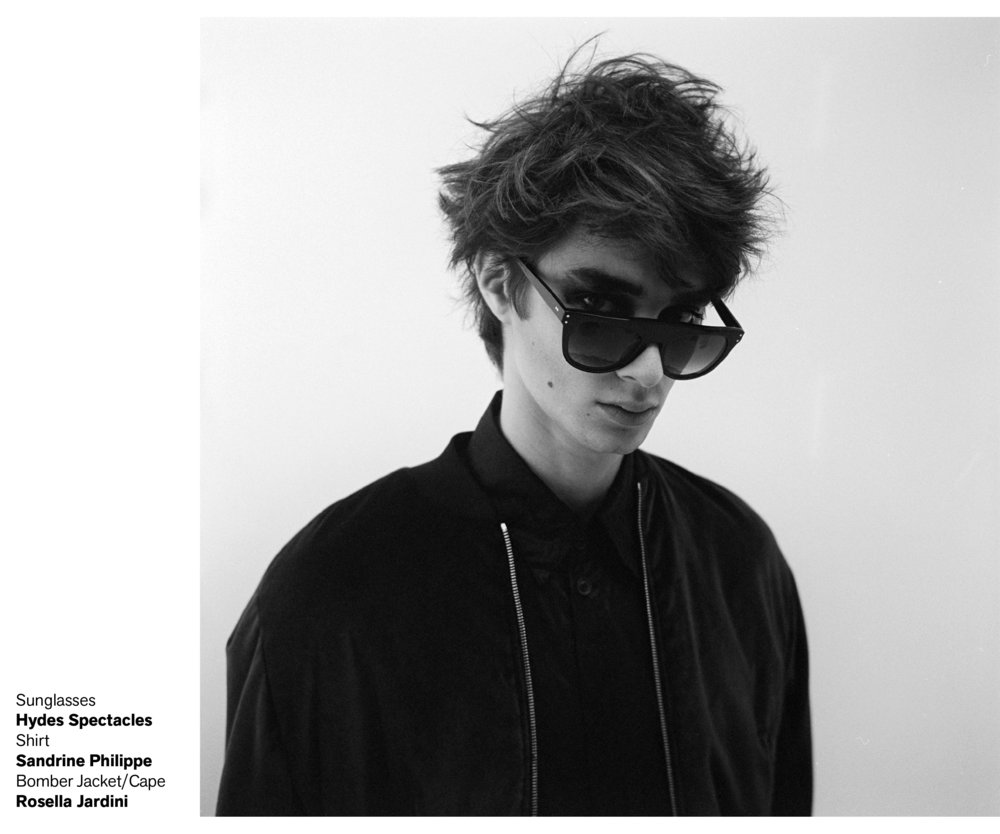 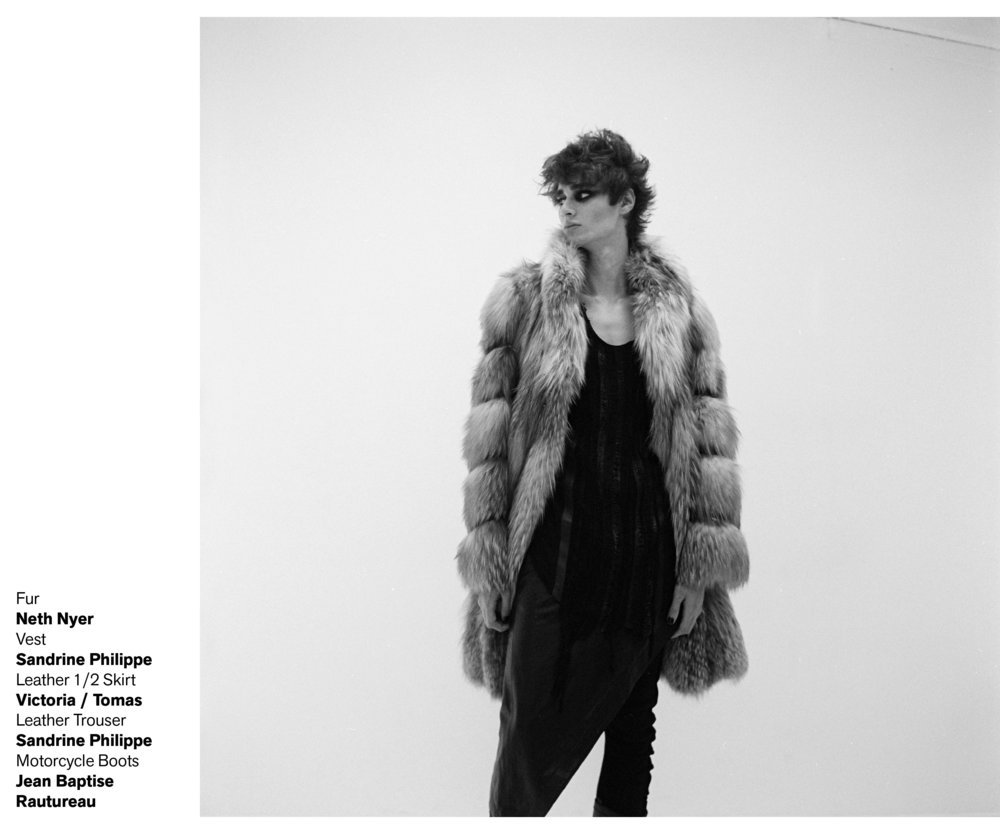 Click here to read the full article on the leathermag.

Rosario Morabito meets Sandrine Philippe, the Paris-based independent designer who’s been pushing the boundaries of leather processing for over 15 years. Here’s how a reputation for beautifully crafted couture pieces was made.
Few fashion designers know exactly where they’re heading. Most change season after season, chasing a constantly evolving muse in a bumpy ride through seasonal trends, and success and failure, often while trying to please too many people at once. A precious few develop a steady aesthetic that instantly connects to a specific audience that speaks the same language, enabling the magic to happen and, ideally, to last.

Sandrine Philippe sits comfortably in the latter category. Upon meeting her, one’s first impression is of a petite figure, with short hair, inquisitive eyes and a calm, rather shy attitude. Studying her collections or attending one of her shows, however, reveals a seasoned designer and a fine connoisseur of leather.
Her story began over 20 years ago in Paris, where she studied fashion, and is still based. After graduation, she followed the usual path of working for others to perfect her craft – in her case, household French names of the time, such as Weill, Popy Moreni and Courreges – until someone in PR convinced her to go solo and launch her own, eponymous label. From being an unknown, independent designer, only catering for women at first, she slowly worked her way up to establish what, 15 years later, would become a well-respected niche brand with an international stockist serving the biggest countries in Europe, as well as the US, Japan and the Middle East.

Her clothes’ dark, post-atomic aesthetic, with a strong urban and edgy element, has stood the test of time. In menswear and womenswear, Philippe approaches the garments sometimes as a second skin, on other occasions as a shield to protect the inner self, pushing the boundaries of what can be achieved with fabric and leather through an ongoing processing method that starts from scratch with each new collection.
She always conceives her pieces as elements of a bigger narrative. “I have always been a dreamer, reading tons of books – authors like Gerard de Nerval are among my favourites – and I guess growing up in Brittany accentuated this nostalgic and romantic side of me.” She explains. “All my collections begin with a story: first I make a master, which works as the key piece for each collection, then we use the codes of each element to create some more wearable pieces… I always say that I am not a fashion designer, but rather a universe builder. Rather than just a garment, I look to create a feeling, a sensation.”
One experiences this notion of being drawn into another world at Phillipe’s presentations. She has always avoided conventional fashion, opting for more conceptual, performance-like happenings that often involve other like-minded creatives. This was the case in 2014, for the collection named ‘Arakhnea’, a collaboration with fellow designer Marco Chevenier and the choreographer and photographer Maxime Leyravaud. The three joined forces to work on a short film investigating the concept of transformation, an element that is deep in the very DNA of Phillipe’s work and brand.

“My studio is more a laboratory in which we experiment with new treatments all the time,” she says. “For the couture collection, for instance, we create each piece ourselves, one by one. It takes approximately three weeks, with two people working a single garment the whole day. It’s a lengthy process that goes beyond regular production, but I really appreciate taking time, because that’s just what’s needed to be able to create such pieces, along with a team that understands and respects the brand.”
Given the amount of craft that goes into each garment, Sandrine Philippe’s creations reach a wholesale price of about €2,000, which is hardly mass-market territory. Her pursuit of integrity and timeless quality over large numbers and seasonal pieces is what makes leather the perfect material with which to bring her ideas to life.
“To be honest, leather was not my first love, but I discovered it gradually,” she says. “I used to have a very traditional – and wrong – idea of leather, especially of leather clothes, like biker Perfecto.
“Then, I was invited to visit a showroom that specialised in leather and it was magic: the smell, the colour range, the sensuality of this material all became immediately evident to me, and ever since I have never stopped working with this truly fantastic material.”
Her enthusiasm translates into immediately recognisable pieces. Each garment goes through several processing stages to create an appropriately aged, lived-in look and feel. “What I love the most about leather,” she says, “is its versatility. I love to destroy and then remake, and leather gives you so many possibilities. Moreover, you have the feeling of creating a mysterious skin of some unknown, fantastic animal.”

The same thing can happen when leather is mixed with other materials, as in Phillipe’s Urban Animals collection, in which she experimented with silicon to develop a new fabric.
“Our customers love it: they adore handcrafted work and feeling the passion we put in our garments,” she says.
The latest collection, for the autumn-winter 2017–18 season, was presented via a performance during the menswear shows at Paris Fashion Week in January.
The theme was ‘portraits de famille’, and it featured a mixture male and female looks, made predominantly of layers of cotton in a scale of blacks and greys, plus her signature long coats in crumpled fine leather.
“It’s the story of three big families, comprising a mix of different characters,” she explains. “There’s the animal, the neo-dandy and the fighters.
“They all stare at each other, sure of themselves and of their identities at first, but gradually meet the others, blending in one big nice family at the end. It was my way of saying that, these days, the world’s better if we appreciate the others, and we are stronger together, despite our differences. It’s a collection of timeless garments, also informed by the ideas of poetry and emotion.”
It is interesting to an independent label coping with a constantly shifting fashion system. Fashion shows are essential in many ways, but can also be very constraining; gender boundaries have collapsed in 2016, and seasonal distinctions are getting thinner, while a see-now-buy-now attitude is pervading the industry.
Phillipe seems this as a challenge, as well as an opportunity. “The challenge happens when a small brand like mine struggles to maintain this type of handcrafted work on time,” she says.
“A big part of the fashion community cares about trends and costs, while our value is to create an identity, not a trend for fast consumption.
“But it’s also an opportunity, as there’s clearly another, rising, side to this world that is looking for more honesty and sincerity. A truly alternative fashion scene is made up of designers who love their work, and are not just looking to be part of a scene.”

With Philippe’s integrity and commitment unaffected by two decades in the business, her brand can look forward to a bright future. In a global market that gets more complex by the day, she can rely on years of experience, a loyal customer base and daring ideas with which to reinvent herself, as well as the creative courage to challenge competitors.
“For me, keeping my lines and trying to do my best to keep my brand identity is enough, providing my customers with some surprising pieces that reflect the DNA of the brand and creating more universes and emotions,” she says.
“What I value the most in this job is liberty: the possibility of proposing a certain view of beauty and emotions.” In other words, the chance to keep writing fantastic new leather stories. ? 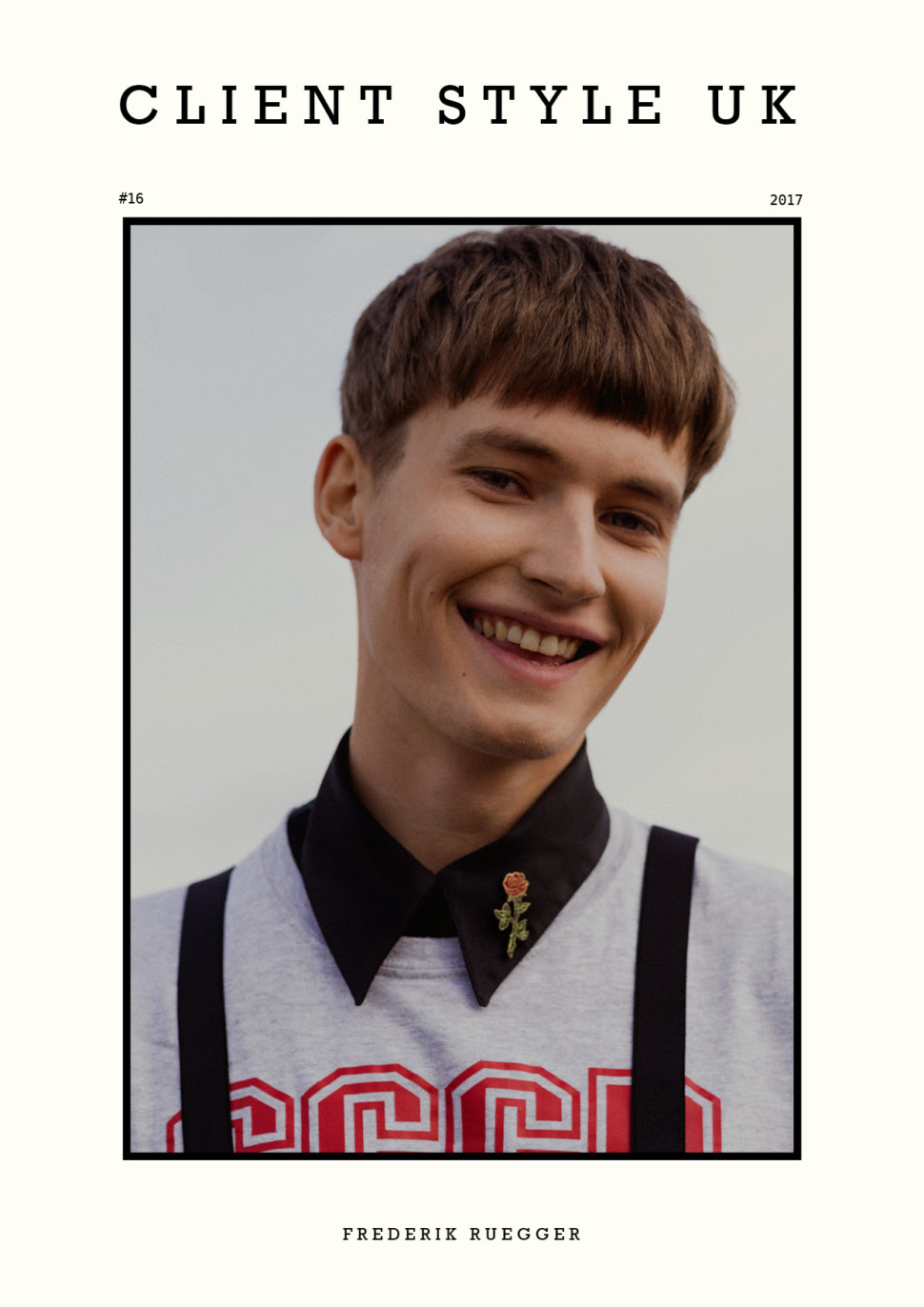 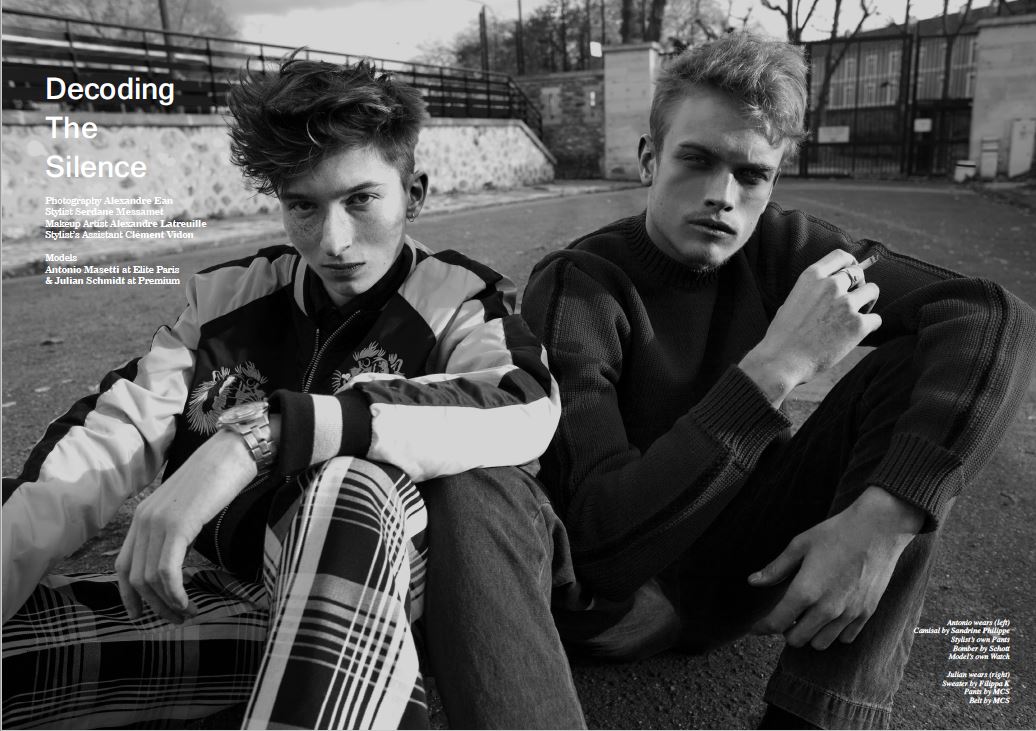 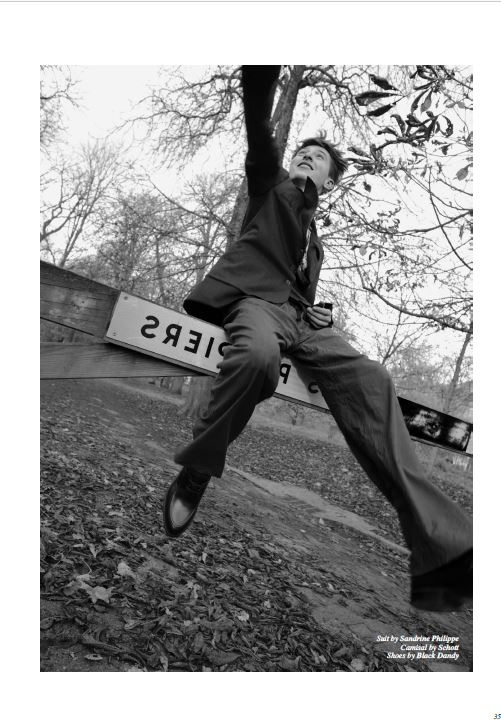 Sandrine Philippe and her universe

Walk into Sandrine Philippe’s atelier and this is what you will find is precious in its unique fragility. Each outfit is meant to make you think of the story behind it ; it’s meant to make your imagination run wild as you rediscover the poetic dreamer within. She wants her clothes to be able to excite emotions, create fantasies and evoke memories.

The Parisian designer herself has a potent energy about her like the little girl on her path to discovering hidden treasures in her attic. She weaves this energy into all her designs and creations.Sandrine’s identity lies in natural materials like cotton, wool or the more precious silk.

In keeping with this naturalist theme, all her designs have at least one aspect to them that is hand-made or hand-painted. Each collection is a melange of the stylish with a touch of unusal, the retro and the ludique.

In Sandrine Philippe’s atelier you will find a wide variety of outfits that include the very precious evening gown to a daily wear t-shirt. Here collections are versatile and perfect for stylish contemporary wardrobes. With simple cuts, the clothes are easy to manage, have a high level of confort and make you feel like you’re in the possession of a priceless and timeless garment.

Sandrine Philippe studied fashion design in France and worked as a designer with Popy Moreni and Courrèges after which she created her own brand.
Her clothes are distributed and sold in France, Germany, Belgium, Ireland, Greece, Kuwait, UAE, USA, Italy, Japan, Labanon…

Focus on beauty backstage and performance at Menswear Fashion Week in Paris.